“We need money for people to complete secondary school and we need scholarships for students to go to Kenya, Uganda, Ethiopia, Egypt and South Africa. We also need teachers from other countries to train our teachers.”

Power for the People (PFP) visited Blue Nile in January 2018 together with Humanitarian Aid Relief Trust (HART) meeting community leaders, activists and Internally Displaced Persons (IDPs). Acute shortages of food and no access to healthcare or education are resulting in overwhelming manmade need and suffering.

The Sudanese people have lived in near-constant conflict and instability for over sixty years. In Darfur, Southern Kordofan and Blue Nile, the Government of Sudan (GoS) has targeted civilians with aerial bombardment, missile attacks and ground offensives.  The assaults directed at schools, churches, mosques and marketplaces, and target indigenous Africans, moderate Muslims, Christians and traditional believers. Aid organisations are restricted from working there, leaving the people without aid or advocacy. A ceasefire was agreed last year. Despite general cessation of aerial bombardment, we heard of continuing overflying by GoS aircraft causing fear, panic, disruption of activities and displacement of civilians. 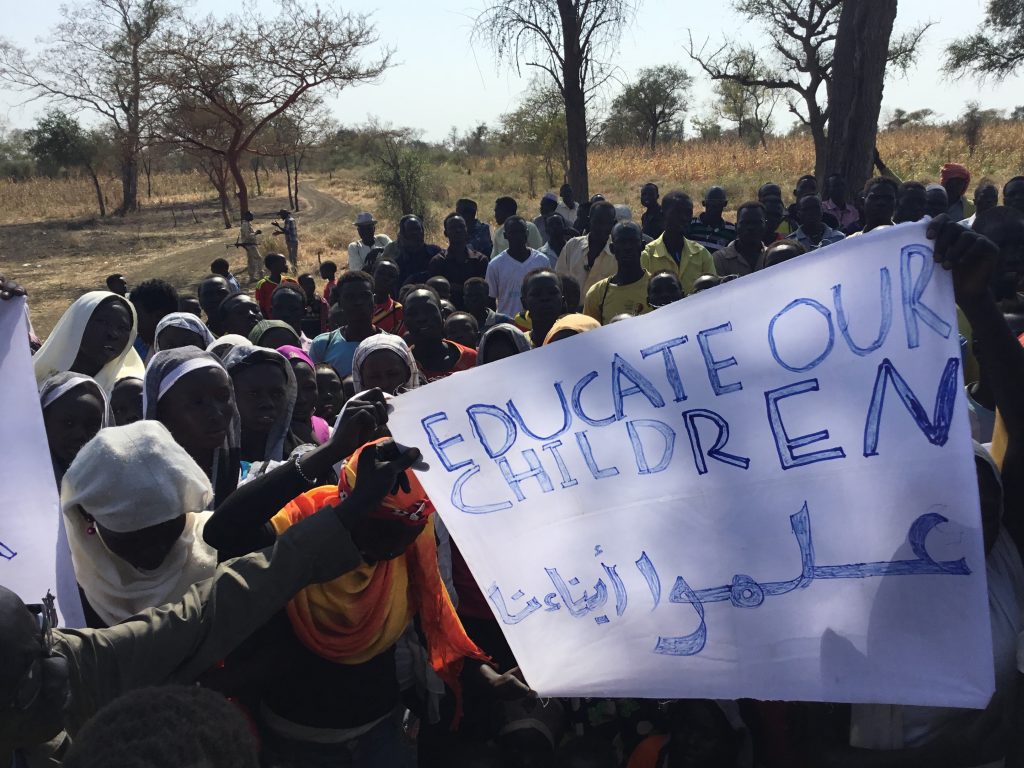 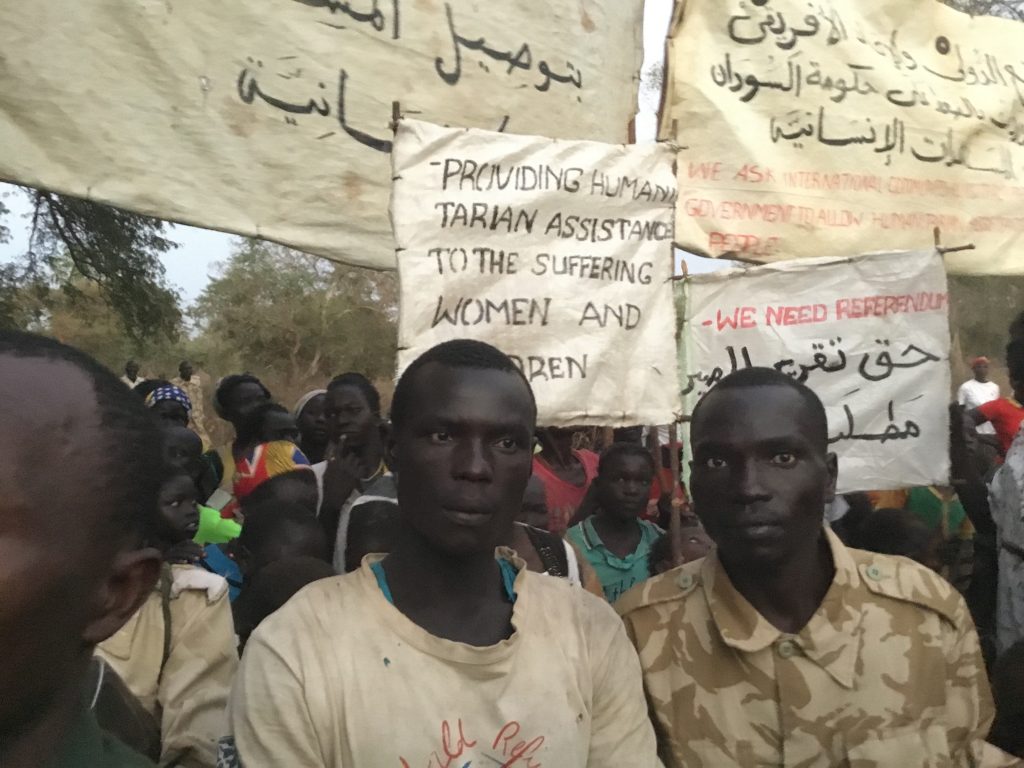 Over 300,000 people have fled to neighbouring Ethiopia and South Sudan to seek refuge, leaving only 90,000 remaining in the Sudan People’s Liberation Army-North (SPLA-N) controlled Blue Nile state. Hundreds of thousands remain in Government controlled areas. Th ere are reports that much of their land (especially in the Ingessena region) has been taken over by the GoS and given to its supporters – large plantations given to Arab leaders from neighbouring countries; smaller land plots given to supporters such as mercenaries.  The indigenous civilians are unable to cultivate in large areas and many have fled as IDPs to a camp in the Doro area; large numbers are held reportedly, not allowed to leave, for forced labour on the land that was once their own.

There are only 32 primary schools in the Blue Nile, and no access to higher education.  There are no paid teachers, no training, text and exercise books and other materials. The people we spoke to unanimously stressed the urgent need for education as the foundation for peace and regeneration.

“The future for my children will be difficult without education. Children are meant to look after their parents when they are old, but I will have to work.”

“What makes me fearful is no education for the children. I was a member of a committee to make children go to school and it is painful that they can’t go. I am not happy about this. An Antanov bomb once landed close to school and this causes fear.”

“I am angry and sad because our children do not have a school and they have no future.” 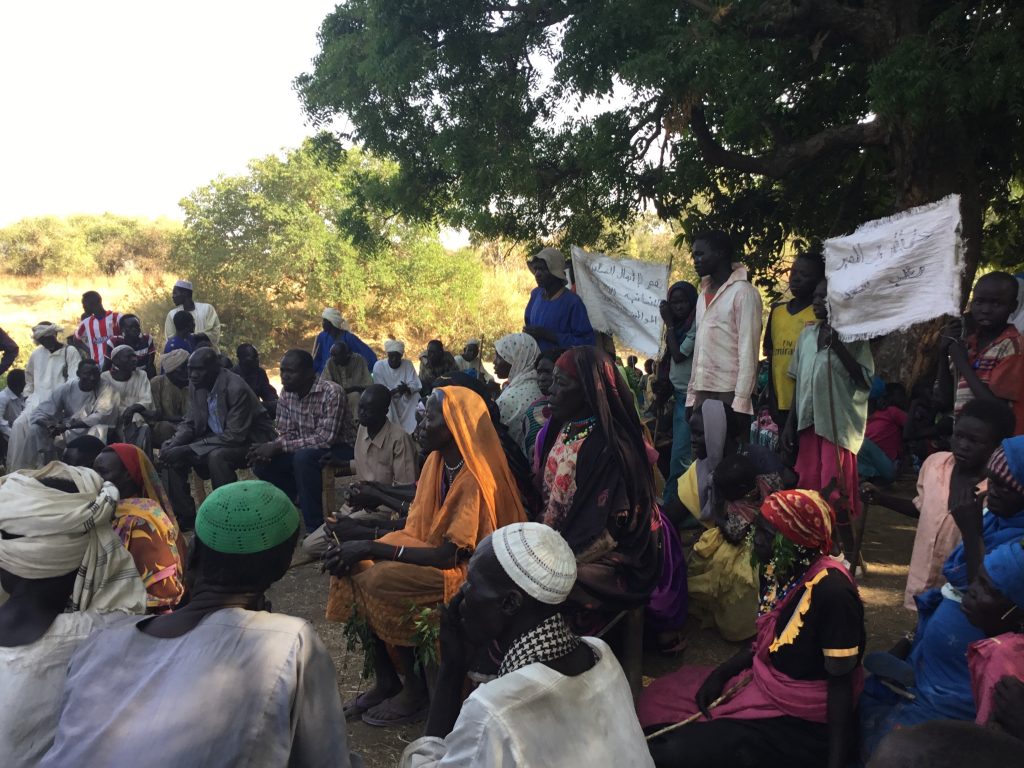 Many students flee to refugee camps in Ethiopia and South Sudan for better schooling but it is very difficult to finds the means for food, accommodation and school fees. Education for girls is also affected by cultural traditions: only 40% of girls go to school, and most drop out to marry very young. Scholarships are needed for both boys and girls who would to go to secondary school or university.

St. John’s College is the first Theological College to be opened in the Greater Bahr el Ghazal Region among the cluster of the eight Dioceses of the Episcopal Church of Sudan that make up the region. The College, established in 2011 by Archbishop Moses Deng, has grown from two students to 5000 students for the Academic Year 2018. It is dedicated to the spiritual, social and academic development of its students. At the successful completion of their studies students are issued with a diploma from a recognized university: St John’s College is accredited by Bishop Gwynne College, Juba and observed by St. Paul’s University in Limuru Kenya.

The College specialises in Biblical Studies and offers 3-year Diploma courses in English Language, Mathematics, Business Administration & Management, Accounting & Finance, Public Administration & Management, Project Management & Entrepreneurship, Procurement& Logistics Management; and Primary Education. As a champion of Kingdom Leaders for Social Economic Development and Lives of Transformation, St John’s College offers a local, culturally-aligned and safe facility for nurturing and developing the potential of talented Sudanese and South Sudanese students, and building a network of young, educated professionals who are passionate about building a peaceful, prosperous future for themselves and their communities. Electricity is a key issue for the College. Students need lighting for study and security, and power to charge mobile phones, tablets and computers, and access the internet. The main source of generation is diesel, which is expensive and difficult to source. 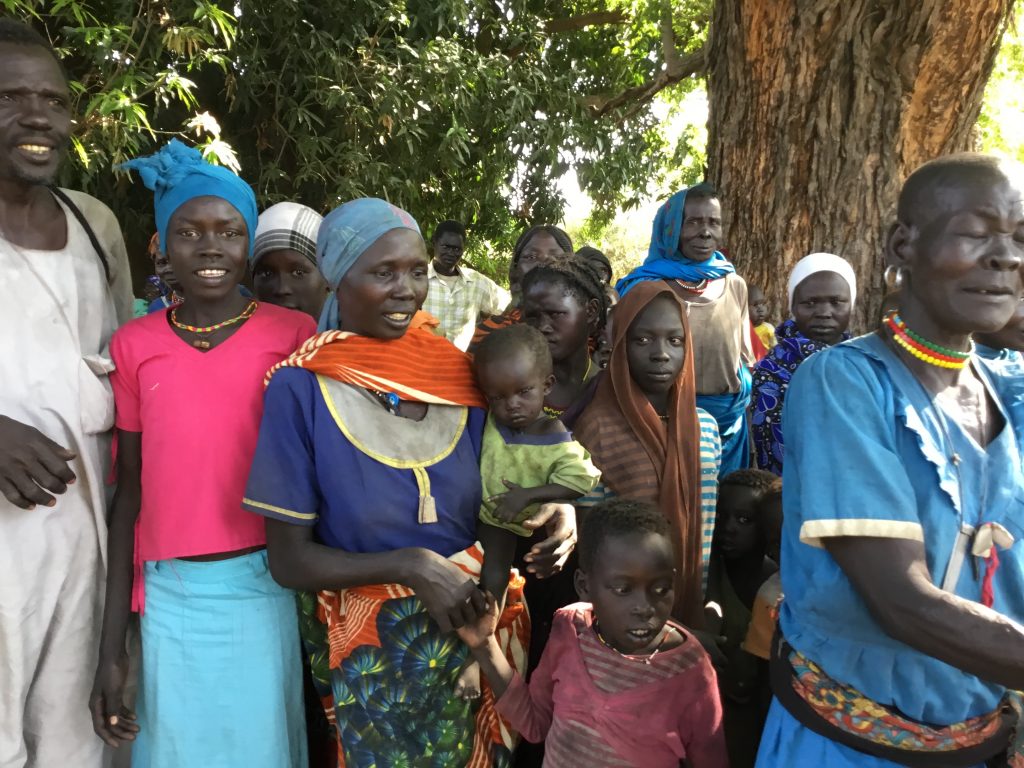 Our project establishes a three-year scholarship program at St. John’s College for students from the Blue Nile, South Kordofan and Maban. The purpose of the program is to increase much needed skills and expertise – such as teachers, entrepreneurs, technologists – in the participating communities. The College receives solar power and lighting units from PFP in lieu of tuition fees for the scholarship students and provides student accommodation for participants pro bono. Archbishop Moses Deng heads a mentoring program for the participating students.

The communities in South Kordofan, Blue Nile and Maban nominate candidates to participate in the Project.  Selected students enroll at St. John’s College on a 3-year Diploma Course of their choice. PFP provides participating students with their own solar power and lighting unit from PFP to support their studies, and to provide a means of generating income, e.g. by charging mobile phones or evening work. The Association of Churches for South Sudan, represented by Mr Benjamin Banabe, is responsible for managing and monitoring the end to end process for students from the Nuba Mountains communities. The Maban District Commissioner’s Office, represented by Issa Khirased Mohamud, manages the end to end process for students from the Blue Nile and Maban communities.

The project will run for three years, with a target of 50 graduates. The main objectives include:

Enable merit-based access to higher education for students from IDP communities. A primary output will be a Diploma Scholarship facility for IDP communities in the Blue Nile, South Kordofan and Maban.

Foster understanding, tolerance and respect among warring tribes by increasing diversity of ethnic groups and tribes at the College